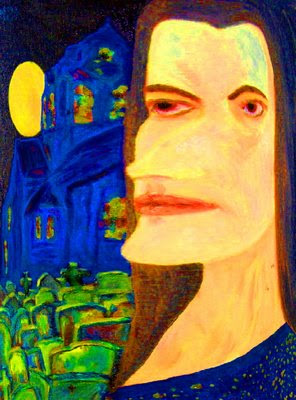 The portrait’s focus is Elizabeth; not the vision to which she and her girlfriend were subjected. The expression in her eyes hints at the spectacle reserved for the two convent girls as they made their nocturnal return home past Highgate Cemetery. The inflamed mounds on her neck are indications of the malign supernatural at work. In fact, they were not apparent at the time of this unearthly experience. The portrait’s diabolical stigmata is a presentiment of terrible things yet to come. Elizabeth’s attire compliments the moon shadows with St Michael’s looming in the background. No crucifix can be seen around her neck. Tombs glow eerily under beams of dull reflection as the moment is frozen in time. Elizabeth Wojdyla’s name would become synonymous with all she witnessed on that night. 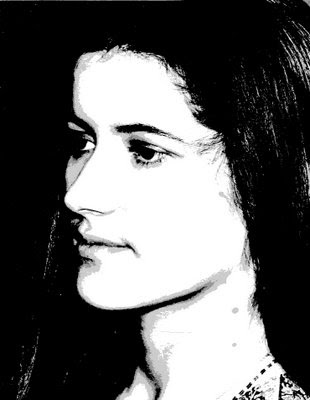 Elizabeth photographed in the autumn of 1969. Revealed are two abrasions on her neck. Page 57 of The Highgate Vampire (Gothic Press, 1991) recounts: “I noticed for the first time the marks on the side of her neck … two inflamed mounds on the skin, the centre of each bearing a tiny hole.” Elizabeth and Barbara, two sixteen-year-old students of La Sainte Union Convent, were walking home late at night after visiting friends in Highgate Village. Their journey took them down Swains Lane which intersects Highgate Cemetery, a Victorian graveyard in two halves on a steep hill. These intelligent students could not believe their eyes as they passed the cemetery's north gate at the beginning of their downward path between the two graveyards. For there before them, amongst the jutting tombstones and stone vaults, the dead seemed to be emerging from their graves. The two schoolgirls walked in eerie silence until they reached the bottom of the lane. Here they spoke for the first time, having finally found their voice, and confirmed they had both experienced the same terrifying scene. So frightening was their experience that Barbara would not talk about it again. Elizabeth, however, gave me her account some months later. It was tape-recorded and can be heard in a television film documentary about the Highgate Vampire case. Elizabeth recounted: "We both saw this scene of graves directly in front of us. And the graves were opening up; and the people were rising. We were not conscious of walking down the lane. We were only conscious of this graveyard scene." I have tried to capture this moment in my portrait along with the demonry that later took hold on Elizabeth where her elocuted and very attractive feminine voice would suddenly erupt into a distorted masculine sound, deep and harsh, that issued threats. Her boyfriend recalled this phenomenon in an interview he gave for a documentary (True Horror: Vampires distributed by Discovery Channel) which also includes archive recordings of Elizabeth speaking about her vision and the puncture marks on her neck.
.
Posted by †Seán Manchester at 01:22