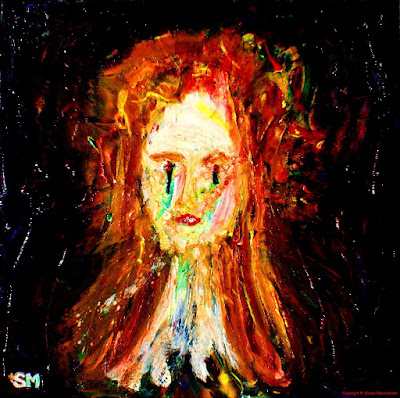 It was when perusing Newstead Abbey’s vast collection while still a child that I first made the acquaintance of the subject in this portrait. That distant introduction was a pencil portrait: a quarter-length drawing of a pensive fairy-like ceature with slightly downcast eyes. Mesmerised by this vision, a window seemed to open within my subconscious mind to rich colours lit by candelabras stuffed with melting candles, heavy brocades and tapestries, exquisitely decorated harpsichords, sombre paintings in large frames, dark oak furniture and reverberating, melodic strains from another time. Amidst all this came a ghostly female with rosebud lips, fawn curls and large, sad eyes. Momentary glimpses of Romanticism’s haunted realm where the flickering, wavering image glided in step to echoes from a tinkling, distant spinet, offered somewhere I would visit throughout my life thereafter — a primitive form of time travel. The identity of my apparition became soon apparent. It was Lady Caroline Lamb. My psychic portal grew faint as childhood innocence itself gradually eroded over the years, but later in life I renewed my acquaintance in becoming the biographer of Lady Caroline Lamb.* Lord Brocket invited me to Caroline’s country residence in Hertfordshire, Brocket Hall, and Lady Brocket entered into a correspondence where she told of a haunting at the Hall. In February 1992, Lady Brocket wrote to me about “a woman in the Ballroom” when her ladyship was playing Chopin's music on the ornate grand piano. It all seemed rather familiar.

Caroline Lamb (née Ponsonby) was born in 1785, the fourth child and only daughter of Frederick Ponsonby, 3rd Earl of Bessborough, and his wife Lady Henrietta Frances Spencer, who was the sister of Georgiana Cavendish, Duchess of Devonshire. In 1805 she married William Lamb (later Lord Melbourne) against the advice of her parents. This childlike attitude is carefully reconstructed in the character of Calantha, one of the protagonists of her novel Glenarvon, whose strict religious principles and childish behaviour are at the origin of her extreme vulnerability. (Calantha is also the name of a character in my novel, Carmel, which is loosely rooted in fact). Caroline and William Lamb had three children, of whom only one survived, Augustus, who had mental problems throughout his life. Caroline met Lord Byron in 1812, first at Lady Jersey's Ball, where she refused to be introduced to him, and later at Holland House. Their illicit relationship lasted from March to November and was as intense as anything could be when Romantics meet. 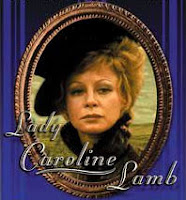 
The affair with Byron was also an evasion from the dullness of her matrimonial life. William kept her in what was virtually a silver prison, treating her as a child rather than a sensible and mature woman and mother. Her only past-time was reading, which, together with her extremely emotional attitude brought her to confuse reality and fantasy. Like many other female admirers of Byron, she had felt attraction for him while reading Childe Harold, which made her desperate to meet the author. Both the reading of Childe Harold and her liaison with Byron helped her to break the rigid codes of femininity and domesticity that had been imposed on her since her childhood. Byron inspired her to transform from the faithful, albeit docile, wife to the overwhelmingly passionate and desiring woman. The idea of a demonic Byronic hero was undoubtedly influenced by Caroline's widely-read Glenarvon (1816) and by her two other novels, Graham Hamilton (1822) and Ada Reis (1823), together with Gordon: A Tale (1821). There is also evidence that Caroline's works influenced John Polidori's The Vampyre (1819) and hence the Byronic tradition that derived from it.
.