The full title of this newly finished canvas, completed today on the anniversary of the Blessed Virgin's first appearance to Bernadette Soubirous at the grotto of Massabielle on 11 February 1858, is La belle Apparition à Lourdes. It can be viewed at my private retreat where it is permanently displayed in the presence of sacred relics of the saint. 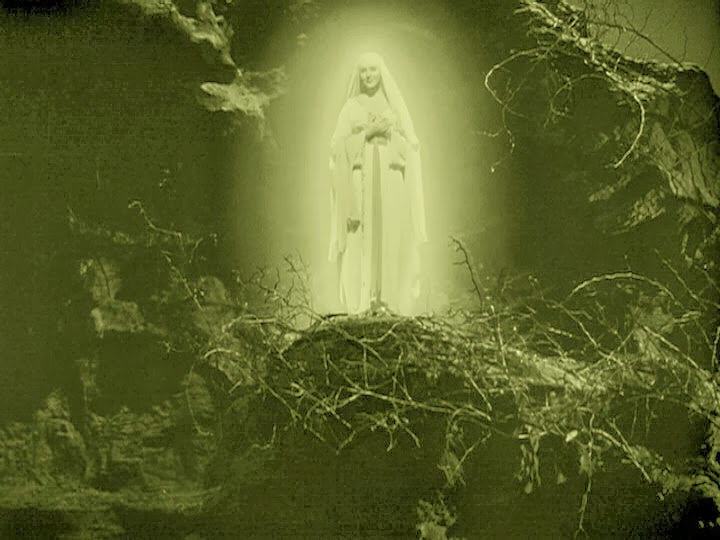 The Beautiful Apparition from The Song of Bernadette (1943). 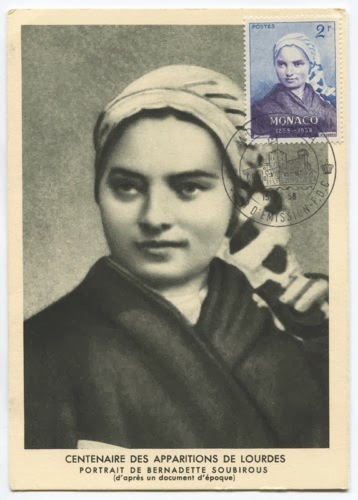 Lourdes is a village in France where the Blessed Virgin appeared eighteen times to Bernadette Soubirous in 1858. Her  messages to Bernadette are ageless and apply to all of us today.

Bernadette seemed relieved that she was becoming less of a public figure following the visions of the Blessed Virgin. Several months had passed, and after receiving communion on the feast of Our Lady of Mount. Carmel, Bernadette felt an irresistible urge to return to the Grotto. Since the barricade was still in place, she and her aunt could not get as close to the sacred spot as they wanted, so they knelt in the grass, and the Beautiful Apparition of Our Lady appeared to her one last time.

Bernadette joined the order of the Sisters of Charity. Throughout her life she remained sickly, but attended patiently to her duties as infirmarian and sacristan. She died a holy death on 16 April 1879. She was thirty-four years old. Bernadette was buried on the convent grounds in Nevers, France. Her body was exhumed thirty years later on 22 September 1909 in the presence of two doctors, several appointed officials, and nuns from the local convent. When Bernadette's coffin was opened there was no odour, and her body was untouched by corruption.

A second exhumation took place on 3 April 1919. The body of the then declared Venerable was found in the same state of preservation as ten years earlier, except that the face was slightly discoloured, due to the washing it had undergone during the first exhumation. A worker in wax was entrusted with the task of coating the face of the Saint who had been dead forty years. The sacred relic (Bernadette's body) was placed in a coffin of gold and glass and can be viewed to this very day in the Chapel of Saint Bernadette at the motherhouse in Nevers, France. Posted by †Seán Manchester at 04:00 No comments: